Mustard is one of those ingredients of which I am not a fan. I use it in cooking but refrain but spreading it on a sandwich, a burger, etc. This Cooking Tip is for those of you who (like my husband) love mustard. Real mustard aficionados may want to visit the National Mustard Museum in Middleton, Wisconsin. It boasts having “more than 6,090 mustards from all 50 states and more than 70 countries.”

Mustard is made from ground mustard seeds that are mixed with liquid. Different types of mustard seeds yield different levels of spice. Yellow seeds are the mildest with brown and black having a higher spice level. The seeds on their own really have no heat; it is only when they are combined with liquid that the enzymes present in the seeds help to release the compounds that account for the heat of mustard. The more acidic the liquid, the slower this reaction occurs resulting in a longer-lasting heat. This is why mustards made with vinegar hold their heat whereas ones made with water lose their pungency more quickly. Even the temperature of the water affects the flavor. Hot water tends to deactivate the enzymes and break down some of the heat compounds. This is why the mildest mustard you can buy is that made from yellow seeds and abundant vinegar. On the other end of the heat scale is mustard made with brown or black seeds and cold water.

Here are a few of the mustard varieties that you may see on your supermarket shelves.

Yellow mustard – made from yellow mustard seeds, this variety is mild rather than spicy. It is what we think of when we grab for that American-style mustard. Its yellow color comes from the mustard seeds as well as the addition of turmeric. The liquid used is a mixture of vinegar and water. Although not very hot, its flavor still has a sharp note. It is a favorite for topping a burger or hotdog.

Brown mustard – made from the small and hotter brown mustard seeds and less vinegar than the yellow variety. It is more assertive and spicier as well as being more coarse (due to leaving the bran on the seeds). At times, other spices such as cinnamon, ginger and nutmeg are added. Because of its full flavor, it stands up well to meats such as pastrami, roast beef and sausages, earning it the name “Deli” mustard.

Dijon mustard – this variety was first made in 1865 in Dijon, France. It is made from the hotter brown mustard seeds and originally the liquid was “verjuice”, an acidic juice made from unripe grapes. Today, low acidity liquids such as white wine are used. Both the brown seeds and the lower acidity result in a strong and sharp flavor. Because of its smooth texture, it is a favorite for salad dressings or creamy sauces. It is considered a medium-hot mustard.

Whole-Grain mustard – also known as Coarse mustard. The seeds are only ground enough to make a paste yet leave a coarse texture with bits of mustard seeds. The different brands will have varying heat levels.

Honey mustard – a mixture of honey and mustard, usually on a one-to-one ratio. The mustard is generally of the milder, yellow variety. Because its flavor is on the sweet side, it is often served as a dipping sauce.

Hot mustard – the high heat level comes from using brown or black seeds along with cold water. Chinese hot mustard is of this variety.

English mustard – this is really just a type of Hot mustard. The one we usually see is Coleman’s, which is made from a mixture of yellow and brown mustard seeds. By not using vinegar, the goal is for an increased heat level. However, since it uses both yellow and brown seeds, it is not quite as hot as Chinese mustard.

German mustard – these mustards cannot be put into one category. Rather, they range from sweet to spicy and from fine to coarse. Some also add other ingredients such as horseradish.

Beer mustard – in this type of mustard, beer is the typical liquid although vinegar may be added. Since there is less acid, the heat level is significant. The flavor of the beer can vary from mild to strong depending on which beer is used. Similarly, Spirit mustards use spirits rather than beer although vinegar is typically also added. Whiskey and bourbon are common.

There are also many creative variations although they are certainly not as common on our supermarket shelves. These include mustards that use wines other than white wine, mustards flavored with horseradish, sriracha & balsamic vinegar. Other sweet mustards such as Pecan/Honey & Brown Sugar are also made.

Although mustards made with acidic liquids retain their punch longer than those made with water, all mustards will lose some of the pungency over time. Therefore, buy it in small quantities and store it in the refrigerator once opened.

If you do not think you like mustard, perhaps this guide will help you find a mustard you like. But, then again, if you are like me, none will make it onto my bratwurst! 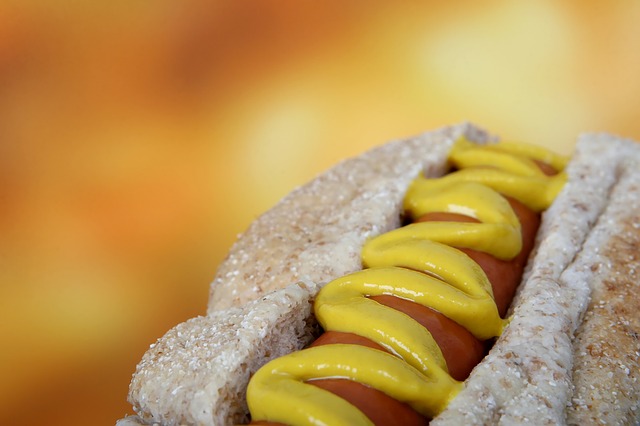