Cinnamon is one of those wonderful, warm spices that makes us think of fall. It is a spice, though, that I daresay most of us use year-round. In this Cooking Tip, I want to talk about the different types of cinnamon so you can choose what works best for you. 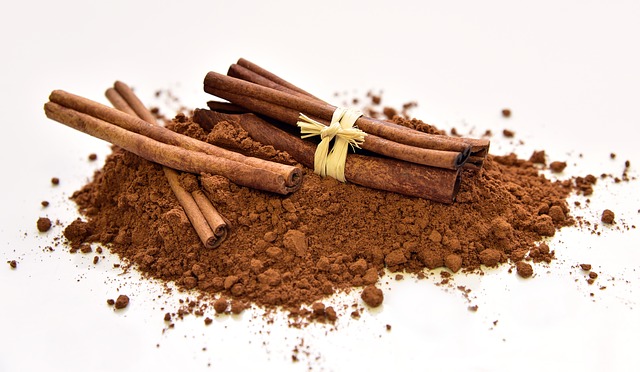 There are two main types of cinnamon – Cassia cinnamon and Ceylon cinnamon. They are from the bark of different trees (although the trees are related scientifically) and are very different products. The different trees result in different levels of the volatile oils, which is what impart the flavor. The amount of these oils can also vary with the age of the bark at the time of harvesting. Older trees contain more oils.

Cassia cinnamon is what most of us probably have in our pantries and see on most supermarket shelves. In the bark-form, it has a rougher texture, a darker color and is rolled into thicker sheets. It also has a more intense flavor, which is what makes it a favorite in the culinary world.

Cassia cinnamon can be further broken down into Indonesian, Chinese and Vietnamese/Saigon.

Ceylon cinnamon is often referred to as “True” cinnamon and is native to Ceylon/Sri Lanka. As compared to cassia, the bark sheets are thinner and finer in texture. Its flavor and aroma are very mild and delicate although proponents say its floral and citrus notes add more complexity to the flavor. It is more expensive and harder to find than cassia cinnamon. The trees are usually only 3-4 years old. Another interesting fact is that this is the type of cinnamon that is most used in Mexico where it is known as canela. (Asian dishes are more likely to use cassia cinnamon.)

So, there are definite differences but do they make a significant difference in what comes out of your kitchen? Cooks Illustrated did a taste test of eight cinnamons. Half of them were from Vietnam and the other half were Indonesian. While definite differences could be detected when the cinnamon was simply sprinkled on rice pudding, those differences went away when baked into cinnamon rolls or on pita chips.

Cooks Illustrated also did a different taste test comparing three Ceylon cinnamons with their favorite Indonesian product. Once again, they added them to rice pudding as well as baking them into cinnamon rolls. In this test, tasters could easily identify the Ceylon products as they were milder although they preferred the spicier Indonesian cinnamon.

Serious Eats also did tastings and produced the following recommendations.

One aspect with which you may or may not be concerned is the presence of a compound known as Coumarin. It is found in much higher levels in the cassia cinnamon as opposed to Ceylon cinnamon. Some feel it may have deleterious effects on your liver. Whereas this is probably more of a problem if you are taking cinnamon supplements, if you are concerned, consult your physician. Here is a link to a discussion of cinnamon and coumarin by the National Institutes of Health.

Just like any other spice, store your cinnamon in a cool, dark and dry place. It should last at least a year. If you take a sniff and don’t smell much, it is time for a new bottle. Some recommend grinding it fresh from cinnamon sticks. Of course, how fresh it will be depends on how fresh your sticks are. You may have no idea of this when buying in a supermarket. It is unusual but not impossible to find harvest dates on your cinnamon sticks. Cinnamon Hill is one such place. If you know of others, let me know. If you have read many of my Cooking Tips or attended my classes, you will know that I am a fan of Savory Spice Shop. Next time I am in their shop, I will ask if they know the harvest dates of their cinnamon sticks. If you want to know their answer, just email me.

I encourage you to pick up some of these cinnamon varieties and do your own taste test. You may not find just one favorite and that is fine. Different cinnamons lend themselves to different preparations. Enjoy and have fun with cinnamon!