Warmer weather is often an incentive to eat more salads. The word “salad” can mean a lot of things but it usually includes some sort of greens. Americans tend to equate lettuce with iceberg lettuce but, there are so many more varieties of lettuce and greens to liven up your salads. In this Cooking Tip, I would like to open your eyes to all there is out there. The following list is not all-encompassing as the Yuma, Arizona, County Cooperative Extension office claims there are more than 100 varieties of lettuce and salad greens. I will only discuss some of the most common greens.

Leaf lettuce – This type of lettuce comes in red & green. Rather than coming as a “head” of lettuce, the leaves all branch off of a single stalk. Both red and green leaf are mild in flavor and have tender leaves. It is often found in varieties termed spring lettuce, mesclun, etc. It is great for the base of many salads.

Romaine lettuce – This lettuce has elongated leaves with a thick white rib. Its leaves are sturdy but a bit more bitter. It provides more texture to your salads.

Iceberg lettuce – Although iceberg is looked down upon because it does not have as many nutrients as other types, it does provide a nice crunch. It also is less perishable and will last longer in your refrigerator than other lettuce.

Butterhead lettuce – Two types are Boston and Bibb. Boston is an extremely tender and soft lettuce and due to it flexible leaves that can be separated from the head, it is great for making lettuce cups. Bibb comes in smaller heads and has a sweeter taste.

Kale – Although not a “lettuce”, it is thought of as a nutrient-dense green. It does have a bitterness that is not to everyone’s taste.

Arugula – Known as “rocket” in Europe, it has dark green leaves usually with a long, spiky shape. It has a peppery bite to it. It can be used on its own but is often a great addition to other lettuce mixes. It is also used in sandwiches and as a pizza topping. Because of its peppery flavor, it goes well with tangy dressings.

Spinach – Another green that is full of nutrients that can be the sole green in a salad or mixed with other varieties. 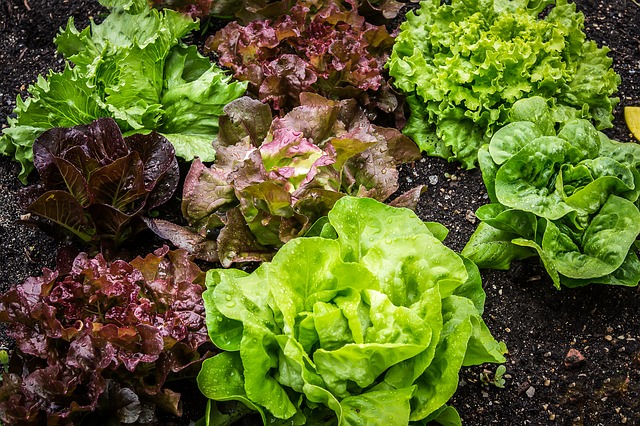 Radicchio – Easily recognized by its reddish-purple color, it also goes by the name of “chicory”. It also tends towards bitterness but that can be tempered by grilling or roasting.

Endive – Also known as Belgian endive, these small leaves are a relative of radicchio and are crisp and slightly bitter. Due to their spoon-like shape, they are great for acting as a vessel for dips or fillings. Another popular preparation is to braise them.

Frisée – Other names include curly endive & curly chicory. These are also in the same family as radicchio and endive and are known by the very curly leaves that are tinged with yellow and green. It has a fairly potent flavor and so, often just a small amount will be added to lettuce blends.

Escarole – This is a type of endive that is mildly bitter. It holds up well to cooking, making it a great addition to soups and pastas.

Mâche – Also known as lamb’s lettuce or corn salad, it is a delicious and sweet green with soft green leaves. Its dark green leaves grow in a rosette pattern. This is one of my favorite greens to add to a salad.

Watercress – The name derives from its semi-aquatic growing nature and is classified as both a green and an herb. It is another green with a peppery flavor.

Mizuna – Also known as Japanese mustard greens, it has a mild, peppery taste. Some say it is like a less intense version of arugula.

For the best salad, try to buy whole heads of lettuce when you can. (Even better, grow your own.) The texture and flavor will be much better than pre-bagged items. They do need to be thoroughly washed before consuming. If you do buy bags of pre-washed greens, the question that always arises is if you need to wash them once you get them home. According to the FDA, prewashed greens can be consumed directly from the bag. They say that prewashed items probably have less bacteria (if any) than what is found on your kitchen counter or sink. Therefore, washing the prewashed greens is more likely to introduce bacteria into an already clean product. Another point made by a microbiologist is that any pathogens remaining on prewashed greens is not likely to be removed by your own washing of them. Here is a link to the FDA Guidelines. If you choose to wash the prewashed greens, make sure your counters/sinks are very clean and store the washed greens in the refrigerator.

TheKitchn.com tested three different methods of storing greens. The favorite in this test was to line a plastic storage container with paper towels, put the greens on top and cover with more paper towels followed by the lid before placing in the refrigerator.

If your lettuce has wilted, it means it has lost water. To refresh it, just soak it in plain ice water for about 30 minutes.

According to WebMD, eating a salad almost every day may be one of the healthiest eating habits we can adopt. It is also one of the simplest and, if you branch out with some of these less-frequently used greens, it can also be a very tasty one!