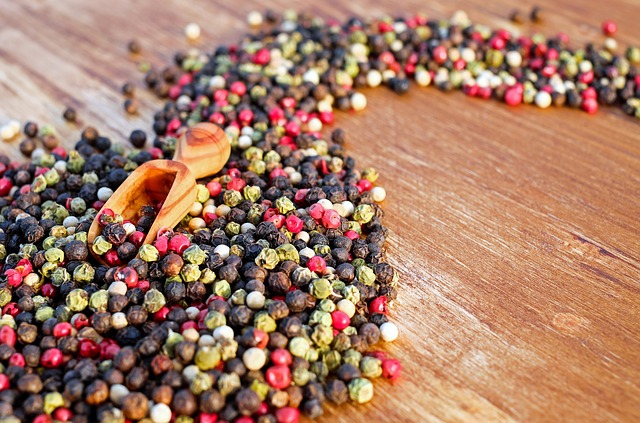 Apart from salt, pepper is probably one of the most commonly used spices in your kitchen. Today, there are multiple types available in the spice aisle. Do you just grab what is cheapest? Have you ever thought if there are differences between types and brands? In this Cooking Tip, I will try to give you some food for thought concerning pepper.

Peppercorns come from the Piper nigrum plant, a climbing vine that is native to India and Indonesia although grown in other tropical countries. Vietnam is one of the largest producers. If destined to become Black Pepper, the berries are picked when they are slightly under-ripe and allowed to dry until they are dark brown or black and shriveled. This type of pepper has the strongest flavor.

White Peppercorns have been allowed to fully ripen, the skin is removed and the berry is dried. White peppercorns have smoother skins, are light tan in color and milder in flavor. They are often used in sauces or foods where you do not want the dark specks or the bold spiciness of black pepper. Its flavor is a bit more earthy than black pepper.

Green Peppercorns are the soft, under-ripe berry and are often preserved in brine although you can find them in dried form. They have a fresher and less pungent flavor.

Pink Peppercorns are misnamed as they are not truly peppercorns. They are the dried fruit from the Brazilian pepper tree. They have a rosy color and, although still spicy, they also have flavor notes of herbs and citrus. Besides flavor, they add an element of color to the dish. Because this tree is a relative of the cashew tree, people with nut allergies should be cautious before consuming. The berries are too fragile to be put through a peppermill and, so should be crushed by hand.

Apart from the type of peppercorn, there are also differences depending on the origin of the plant. Just as with wine or tea, the variations in terroir and climate can make the flavor profile distinct despite being the same plant.

Among black peppercorns, one of the most sought-after is the Tellicherry peppercorn. They are grown in India, are larger in size and some feel they are superior in flavor. Recently, Cooks Illustrated did a taste test among black peppercorns – both Tellicherry and regular. They tested them by mixing with rice as well as using them in dishes such as steak au poivre, pepper-crusted beef tenderloin and ricotta/pepper crostini. In these dishes, it was hard to detect any flavor differences. It was a bit more evident in a simple egg salad although it was still subtle. Their conclusion – there was no clear preference among their tasters for the Tellicherry. Rather, they did find more differences among brands. Their three favorites among major brands of whole black peppercorns were Tone’s, Penzeys and McCormick.

Serious Eats also did a taste testing and rated their favorites in terms of type rather than brand. Their tastes preferred the following peppercorns: Lampong (Indonesia), Tellicherry, Brazilian and Vietnamese. They do stress, though, that taste preferences are very subjective. On a more objective level is the flavor profile, aromas and textures of these different peppercorns. Some may lend themselves to particular uses better than others. The main takeaway is that pepper is not pepper. There is a wide variety among flavor that you will only come to know by trying different kinds.

There is one piece of advice that most experts agree upon. No matter what type of pepper you buy, get whole peppercorns and grind them yourselves. Pre-ground pepper can be gritty and tough as well as significantly lacking in peppery flavor. The oils that are responsible for pepper’s heat and aroma start to dissipate shortly after cracking the peppercorn. Another consideration is that whole peppercorns, when stored correctly, will keep their flavor for a little over a year. As mentioned, ground pepper’s flavor starts to degrade shortly after grinding. Who knows how long that pepper in the shaker has been ground and sitting there?

This simple step of purchase a peppercorn grinder and whole peppercorns can make a world of difference in your dish’s flavor. Experiment with the different kinds and brands of pepper and have fun!

One thought on “The Spicy Flavor of Pepper!”