Most of you have probably heard about MSG, an abbreviation for monosodium glutamate. What you have heard has undoubtedly been negative. I decided to look at some of the research about this substance so you can make an intelligent decision about whether you want to use it in your kitchen.

This substance has long been used to create a taste called umami, which is a savory taste. Think eating a steak or the taste of soy sauce in your dish – that’s umami. The Japanese & Chinese have long used it as a flavor enhancer. In today’s world, though, we are cautioned against ingesting it. It has been supposedly linked to headaches, breathing issues and other problems. As early as the 1960s, people began talking about Chinese restaurant syndrome. This was the presence of certain physical symptoms after ingesting food containing MSG. In full disclosure, when I was in school, I participated in a clinical trial to determine if these health issues were related to ingesting MSG. I don’t recall the results of that particular study; all I remember is that I did not personally react to it in any way.

An interesting article published in U.S. News & World Report sheds some light on this. As they point out, monosodium glutamate is composed of sodium and glutamate. The latter is an amino acid that can be found naturally in foods such as tomatoes, Parmesan cheese and mushrooms. They comment that in the 1990s, scientists began questioning this supposed syndrome partly because Chinese people did not suffer from it despite ingesting it much more heavily than Americans. More studies such as the one I had participated in were done and they demonstrated that most people did not have any symptoms from MSG. These researchers concluded that there is no scientific evidence for the Chinese restaurant syndrome.

One possible benefit from MSG is that it contains two-thirds less sodium than table salt and, therefore, might decrease the need for salt while still enhancing the flavor of your dish.

I am not advocating that you use MSG. There are still some sources that do not believe that it is safe. I am just pointing out that the scientific evidence does not support the relationship between MSG and health issues. Our own FDA considers it GRAS (Generally Recognized as Safe).

If you do want to try it, just don’t overdo it. For a pound of meat, only use ½ teaspoon of MSG. For 4-6 servings of soup and vegetables, ½ teaspoon MSG is best. Adding more than the suggested amount of MSG will not make the food taste better.

If you have no interest in adding this to your food, consider the umami-boosting ingredients such as tomatoes, mushrooms, Parmesan cheese, soy sauce, etc. For example, adding just a small amount of soy sauce to your Thanksgiving gravy can enhance the meaty flavor.

Have fun, do some experimenting and keep cooking! 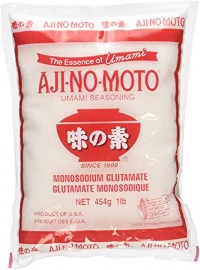