Good cooking techniques transcend the type of cooking you want to do. However, when you get to ingredients, they vary between types of cuisines. Mirepoix, Sofrito and Cajun Trinity are examples of similar items that differ from cuisine to cuisine. In this Cooking Tip, I would like to explain these mixtures, their similarities and differences.

All three of these terms refer to the basis of so many savory dishes. The ingredients are mixtures of aromatic vegetables. These vegetables are diced and sautéed in some type of oil. This base is used in the completion of whatever dish you are cooking. They are meant to provide a subtle but pleasant background flavor as well as supporting and improving the flavor of the finished dish. In French cooking, it is called Mirepoix. Sofrito refers to a similar mixture in Italian, Spanish & Latin American cuisine. For Cajun cooking, it is called the Cajun Trinity, also known as the Holy Trinity.

France is the home of classical cooking techniques. Their classic Mirepoix is a mixture of onions, carrots & celery. The ratio is typically 2 parts onion, 1 part carrot and 1 part celery – by weight. A common variation is White Mirepoix where leeks and parsnips replace some of the onions and carrots. It is used to flavor dishes when you want a white color in the final dish. Other ingredients that are sometimes used are shallots, garlic, diced ham, tomatoes, mushrooms, peppers and ginger.

The classic Italian Sofrito actually starts as something called a Battuto and, once cooked, it is termed a Sofrito. Usually it is a combination of onions, celery, carrots, garlic and parsley although there are quite a few variations on this mixture. It also can include bell peppers or fennel as well as finely diced cured meats such as pancetta or prosciutto. There is no set ratio for the ingredients.

There are many regional variations on the Italian Sofrito including Puerto Rican, Cuban and Dominican. These variations often include ingredients that are specific to those areas.

The Cajun Trinity requires bell pepper, onion and celery. Although there is a difference of opinion on this, a good starting ratio is 2 parts onion, 1 part celery and 1 part green bell pepper. This particular mixture does not usually have as many variations as the other mixtures. Along with a dark roux, it becomes the base for Cajun and Creole dishes such as gumbo, jambalaya and étouffée.

Suppengrün is of German origin and is made of carrots, celery root and leeks. Variations include onions, parsnips and potatoes. There is no set ratio.

From Poland we get Włoszczyzna, similar to its German counterpart but often with cabbage as the primary ingredient.

No matter which version of this base you are using, be sure to cut the vegetables relatively uniform in size. The shorter the cooking time of the ultimate dish, the smaller size the pieces should be. For longer times, they can be cut into larger pieces.

To turn these vegetables into the respective base, heat the cooking fat (typically oil or butter) in a sturdy pan. Generally, the onions (or leeks) will be cooked in the fat first. What comes next depends on the particular mixture. If garlic is called for, add it next but cook carefully so it doesn’t brown or burn. Follow by adding the rest of the vegetables. Lastly, add the herbs.

Usually, only “sweating” the mixture is what you want. This would be done on a lower heat just until the vegetables are giving off some of their juices, softening in texture but not browning. If you are using this base in a dish such as a soup, stew or pasta sauce, feel free to slowly cook the vegetables until they are almost melted. If you wish to add them to something like a frittata or omelet, you may want to stop cooking before they lose all their texture. There are times when the mixture is cooked until it browns but I will leave that for another discussion.

The main take-away from this discussion is that slowly cooking these aromatic vegetables even if you do not follow the listed combinations can add a tremendous amount of flavor. This simple step can take your dish from good to great! 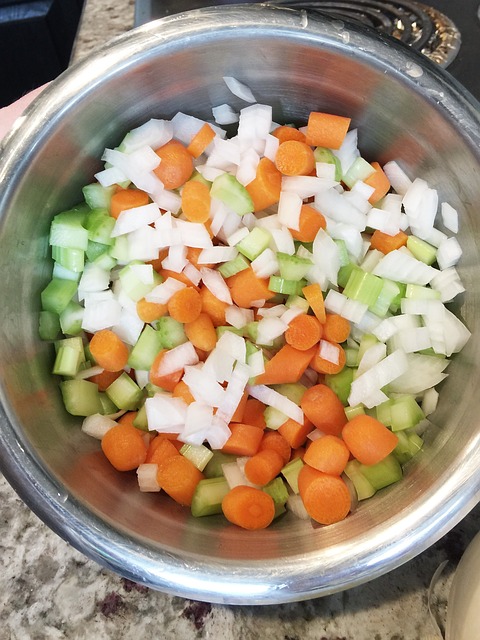 One thought on “Mirepoix, Sofrito & What?”