I was making salmon for dinner and started thinking that I could hardly wait for the time that fresh, wild Pacific salmon is in the stores again. Why is that? Because, in my opinion, it is the best tasting salmon ever. I thought some of you might enjoy a Cooking Tip about this very subject. Now, I am not going to address environmental concerns over farmed versus wild or similar topics. Nor am I going to focus on the health benefits/concerns although wild-caught salmon is felt to be an extremely healthy and nutritious food. I am approaching this Tip purely from a culinary perspective.

Salmon are fish that live naturally in the northern Atlantic & Pacific oceans. The two main groups of salmon around North America are Atlantic and Pacific salmon. There is only one type of Atlantic salmon but there are quite a few from the Pacific ocean.

Chinook salmon (aka King) is the largest and found mainly in Alaska but also down the west coast. It is known for its smooth, melting texture and a rich, buttery flavor.

Chum salmon (aka dog or silverbrite salmon) is found in Alaska down to the northwest tip of the US. As you can assume from the name, this is not a highly desired salmon. There are those, though, that say as long as it is handled properly, it is a perfectly acceptable salmon with a lighter flavor. It is often used for grilling and smoking. 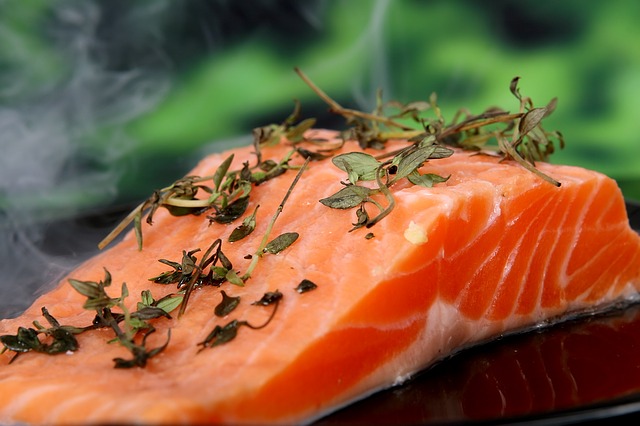 Coho salmon (aka silver salmon) is greatly prized and is found in Alaska and down the west coast.

Pink salmon is the most abundant but also the smallest. It is the type used for canned salmon.

Sockeye salmon (aka red salmon) is named for its colorful red flesh.

All Atlantic salmon is farm-raised, mostly from the states of Washington and Maine. There are also international farms in Canada, Norway and Chili. It is harvested year-round. At times, you will see terms other than Atlantic vs Pacific. For instance, it might say Chilean, Norwegian, Scottish, etc. These salmon are undoubtably Atlantic, and therefore farmed. If in doubt, ask the fishmonger.

If you want wild salmon, you must buy Pacific. The harvest season is from May through September.

Why do I eagerly await the fresh, wild salmon season? The succinct answer is TASTE. In my opinion, the taste of wild salmon is far superior to that of farmed salmon. You will have those that disagree, though, as they prefer the milder flavor of the Atlantic. Another item to consider is that if you look at the signs advertising the Atlantic salmon, you will usually see “color added”. Because of its diet, wild Pacific salmon is naturally orange, pink or reddish. On the other hand, Atlantic salmon is very pale and unappetizing looking. To counter this, the fish are fed an ingredient called “astaxanthin”. Although this ingredient can be produced naturally thorough algae or pulverized crustaceans, it is often synthesized in a lab from petroleum products. Its purpose is to add color to the flesh.

Another term you will notice that I have used is “fresh”. That term distinguishes it from frozen salmon. Pacific (preferably Alaskan) salmon that has never been frozen and has been wild-caught is my preference any day of the week – not only for the superior flavor but also because I like the texture better. Many fishmongers will tell you if the fish has been handled properly after catching and then flash frozen, it is just as good, if not better, than fish that has been transported in a fresh state to the store. One researcher postulated that this may be true for more fatty salmon – either King salmon or Atlantic salmon. Other Pacific salmon is leaner and may not stand up as well to freezing.

Wild, fresh, Pacific salmon will be more expensive. I think it is totally worth it. If you are going to spend the money for this great fish, you want to make sure to cook it properly. There are many different ways to cook salmon – pan-frying, grilling, baking, broiling or poaching. They will all give you different results. The most important thing is to not overcook it. I still remember when we lived in Guam and we went to a very nice restaurant. I ordered salmon and when the server asked me how I wanted it cooked, I said well-done. He looked at me and asked me to try it medium as the Chef recommended. If I didn’t like it, he would ask the chef to cook it more. I agreed. When it came out, I was so surprised at how tasty, moist and succulent it was. It was cooked all the way through but it was not overcooked. I never returned to the land of “well-cooked salmon”!

The best way to ensure you do not overcook your salmon is to use an instant read thermometer. Salmon is a very quick cooking fish. The actual cooking time will vary depending on the thickness of the fish portion and the cooking technique. It can be as little as 6 or 7 minutes or up to 15 minutes. Some experts recommend four to six minutes per half-inch of thickness.

There are some visual signs of doneness. The flesh will turn lighter and more opaque. The middle of the salmon, though, should still be slightly translucent. If it is opaque all the way through, it is over-cooked. The salmon should give way a bit but not necessarily flake. If it flakes, once again it is probably over-cooked. Since these visual cues can be somewhat subjective, taking the internal temperature is the best way to gauge doneness. Many sources will tell you to cook your salmon to 145°. I find that much too high. Cooks Illustrated agrees. They recommend cooking farmed salmon to 125° and wild salmon to 120°. The difference is due to the lower fat content in most wild salmon.

You may balk at those temperature recommendations. However, if you give it a try, I suspect that just as I was in that restaurant in Guam, you will be amazed at the results. Let me know!

One thought on “Salmon — wild or farmed”