Cornmeal, Grits, Polenta – are all of these just different words for the same thing? In this Cooking Tip, I will attempt to clarify what is often a confusing subject. My research found some conflicting statements and if you are a corn farmer (or know one) you may find things with which you disagree. (If so, let me know.) However, I have tried to find somewhat of a consensus.

In my supermarket, I saw several products labeled “Cornmeal” – some were white and some were yellow and there were different brands. There was something labeled as “Corn Grits – also known as Polenta”. I guess that company is covering all bases. There was a separate product just called “Grits”. There was also a box of “Instant Polenta” as well as tubes of something called “Polenta”. What’s a cook to do?

The first thing to understand is that Polenta is not really an ingredient – it is a dish. The term Grits is used to not only describe an ingredient, but also to indicate the dish made from that ingredient. (Are you confused, yet?) Since many recipes and food producers refer to grits and polenta as both an ingredient and a dish, that is how I will discuss it. 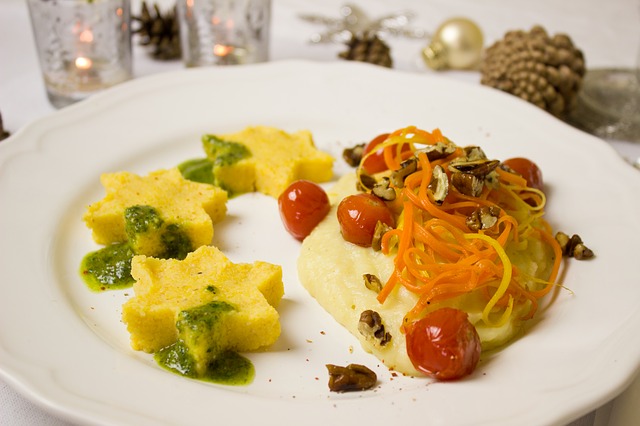 Let’s start with cornmeal. This is an ingredient that is basically corn that has been dried and ground in a mill. The grind may vary from fine to coarse. It can also vary in color: white, yellow or blue. Another difference you may notice is some will be a whole grain product while others will be degerminated. Cooks Illustrated tested a number of different varieties. They preferred the full-corn flavor of whole-grain but felt it was slightly gritty no matter how long it was cooked. The degerminated product (the hard hull and germ are removed) gave a creamier result.

Both polenta and grits are made from stone-ground cornmeal, typically from either a medium or coarse grind. Grits is traditionally a dish made in the southern US whereas polenta is an Italian dish. However, they are also made from different types of corn. Most grits are made from what is called “Dent” corn (field corn). The name comes from a small indentation in the kernel. It has a high soft starch content and is easy to mill.

In Italy, polenta is traditionally made from “Flint” corn, also known as Indian/Calico corn. Its name comes from its hard outer layer that has been likened to being as hard as flint. Because of this, it tends to hold its texture better.

Because of the differences in corn types, grits tend to be mushy while polenta is usually coarser and chewier. However, in today’s kitchens and restaurants, you may not know for sure which product is being used to make these different dishes. The only brand that I found that specifically states it is made from flint corn is Anson Mills. Another good brand, Bob’s Red Mill, uses dent corn. Arrowhead Mills does not state the corn type. Neither does Hodgson Mills.

If you see something called “instant” or “quick-cooking” polenta, it means that it has been par-cooked. Many people consider this variety bland in taste but I have used this type from DeLallo and found it very nice. I also have a great recipe from Bobby Flay for sweet potato and smoked chili grits that specifically calls for quick cooking grits.

What about that tube of something called polenta? It is basically pre-cooked polenta that has been cooled and formed into a tube. It is often sliced and then baked, grilled or seared. If you make your own polenta and let it cool, it will firm up just as in the tube.

So, what product do you use for what purpose? If you are making cornbread, you can probably use any kind of cornmeal but many cooks really prefer a coarser grind for the texture. If you are making a grits dish, try to find something called corn grits or at least a medium or coarse grind cornmeal. For polenta, if you can’t find something that says it is specifically for that dish, you should be fine with a medium or coarse grind cornmeal. Whether you want the whole-grain version or the degerminated will be a matter of personal choice depending on what texture you prefer.

Corn is a wonderful product and comes in so many forms (many that we have not even touched upon) that I am sure there is at least one kind that you will love.