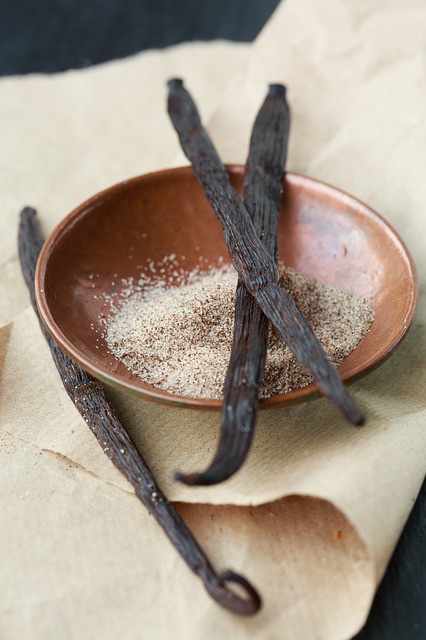 Of all the flavorings you might have in your pantry, I would bet that vanilla is the most common. It is also one of the most expensive and its price has just continued to increase. By weight, vanilla is worth more than silver. In my local supermarket as well as my spice shop, one bean can cost up to $10! The extract is upwards of $2.50 per ounce. So, what is vanilla and do you really need to splurge for that pricey bottle of vanilla extract or container of vanilla beans?

Real vanilla comes from the seed pods of the vanilla orchid. These plants are hand-pollinated and hand-picked one-by-one as they become ripe. After harvesting, the beans undergo a “curing” process, which involves a few different steps. Finally, the beans are ready for selling to consumers or used to make vanilla extract or paste. This entire process is time-consuming and labor-intensive.

There are a number of reasons that vanilla is so expensive that range from the difficulty in growing it as well as a drop in the market when artificial vanilla made an appearance. Many vanilla farmers got out of the business at that time. The demand for real vanilla has been increasing but the supply has been much slower in recovering. Due to the recent high demand, farmers face a new threat – their beans are being stolen. To counter this, some of the farmers are picking their beans while still green but this leads to an inferior product. To read a more in-depth article on this, look at this Business Insider article from September 2018. For another discussion on the problems, especially the harvesting of green beans, see this article from The Vanilla Company .

Imitation vanilla is a synthetic flavoring composed primarily of vanillin. Vanillin is found naturally in vanilla beans but may also be synthesized from clove oil, wood pulp, or other sources. This vanillin is diluted with a liquid and some producers also add other flavors to increase the complexity of the flavor profile as well as caramel coloring.

With these prices and problems within the vanilla industry, you may be wondering if you really need it or whether imitation vanilla will be just as good.

Cooks Illustrated has done taste tests using both real and imitation vanilla. Their most recent testing was just published in the Jan/Feb 2019 issue of their magazine. They tested seven real vanillas and three imitation and used them in recipes for vanilla pudding and vanilla frosting. They then tested the top-rated real & top-rated imitation in vanilla cookies and yellow layer cake. Believe it or not, Baker’s imitation vanilla flavoring came out on top among all the contenders. For a real vanilla, they preferred Simply Organic pure vanilla extract.

Similar results were found in testing published by Epicurious as well as one at Serious Eats.

All of this can be quite an eye-opener as we are told over and over that we should only be using the “real thing.” As you can see from actual side-by-side testing, the more inexpensive imitation vanilla will probably do the job of flavoring most of your dishes just fine. However, it might be hard for some of us to not reach for the authentic vanilla. I must admit, though, that when I am looking at the price in the store, reaching for the imitation is becoming easier. What about you? Are you convinced? Let me know!

Here’s to a wonderful 2019 full of baking and cooking!

One thought on “Vanilla — real versus imitation”