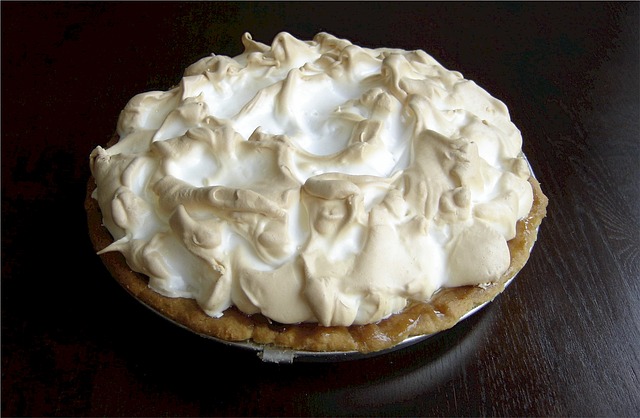 Last week’s Cooking Tip talked about different styles of mousse and how some styles used a meringue as part of the dish. In this week’s Tip, I would to spend more time discussing the different types of meringue – French, Swiss and Italian.

In the simplest terms, a meringue is a mixture of beaten egg whites and sugar. It can be used to fold into cake or cookie batters, as a filling, topping or a stand-alone cookie that melts in your mouth when you eat it. Since the basis of a meringue is beaten egg whites, you may want to review the prior Cooking Tip on egg white foams before attempting these different types of meringues.

French meringue is the most basic of the meringues. It is made by beating egg whites to the foamy stage (45-60 seconds) and then slowly adding sugar and continuing to beat into a soft, airy and light mixture. Adding the sugar too early or too late can lead to disappointing results. Adding it after about a minute of beating when the whites have reached the foamy stage but before they begin to form peaks is ideal. This type of meringue is the easiest to make but is also the least stable. Therefore, it is usually used when it is going to be baked – either in a cake batter, meringue cookies or a meringue shell that is then topped with fruit, whipped cream or a type of mousse.

Swiss meringue is prepared differently. Egg whites and sugar are put into a bowl that sits above boiling water – a type of bain marie. When the mixture reaches the temperature of about 120° to 140°F, the mixture is removed from the heat and then beaten to stiff peaks. This method results in a meringue that is less fluffy than French and less stable then Italian. The recipe testers at Serious Eats, though, claim to have found a technique that will make your Swiss meringue as light as a French meringue but as stable as Italian. They do this by cooking it to a higher temperature – up to 175°F. They also whip it vigorously at high speed for about 5 minutes, until it is very glossy, thick & stiff. This type of meringue is often used as the base for buttercream frosting.

Italian meringue starts by putting the egg whites into your mixer bowl and beating to soft peaks. Then, a sugar syrup that has been heated to 240°F is slowly drizzled in while you continue to whip until the meringue is very voluminous and reaches the desired peak. Because this sugar syrup is very hot, one must be very careful when using this method to prevent burns. It is the most stable of the meringues but is also heavy and thick. It is what is used to make nougat and is also the best one for topping meringue pies.

Watching egg whites transform into a beautiful fluffy meringue is almost miraculous. Using this meringue to then top your pie, to lighten your cake batter or to bake into a pavlova or meringue cookie is further evidence of the wonderfulness of eggs!